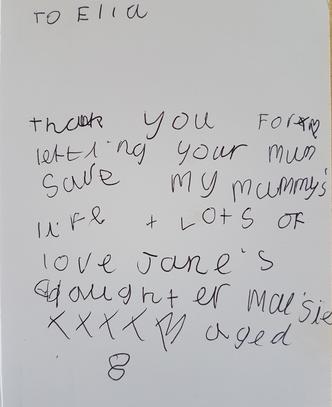 A few months later I received cards from Jane who had received Tishs lungs, and Teresa who received her kidney and pancreas together as a double transplant.

Jane had her lung transplant on what should have been my mams birthday, and became a grandmother for the first time to a little girl who now shares Tishs birthday. I don’t believe that was a coincidence! Jane and Teresa both have sons the same age with the same name too!

When my mam was in the hospital before she slipped into a coma, she was talking a lot of gibberish; but one of the main things was that she was telling all the doctors that she was a diabetic, and that she had been to the diabetes clinic who had changed her medication and that is why she was ill. I had no idea where this was coming from as she had never had diabetes in her life, but it turns out that Teresa was a diabetic, and that was her life before transplant - so again I don’t think this was a coincidence. I truly believe that Tish chose both Jane and Teresa.

When my mam suffered a sudden brain aneurysm and died, it was truly the most horrific and shocking time of my entire life. The only thing that kept me going was the love of my family and friends, and the decision that myself and Eileen (Tishs sister) made to donate her organs.

It was so surreal, but the thought that my mam could somehow offer hope to some other families and stop them from being in the same position as us, was strangely comforting.

We had never discussed organ donation, but I always remember my mam saying that "the body was simply a vessel for our time on this earth," and knowing how much she always tried to help people  - especially people who were less fortunate than her - told me it was the right thing to do.  "Once you are gone, you are gone" was another thing she used to say, so I consented to organ and tissue donation and she went on to save the lives of four women and the eyesight of four men. 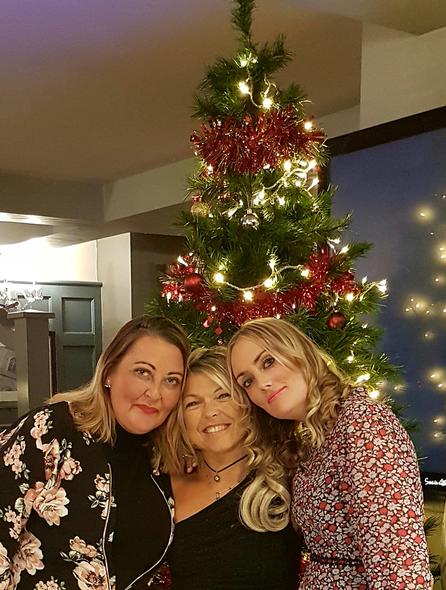 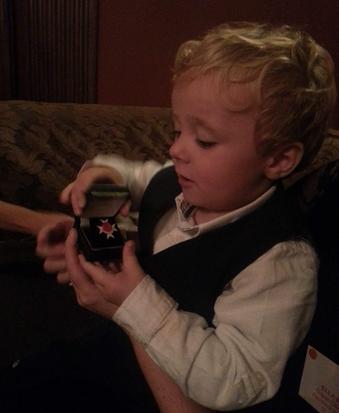 I received the most beautiful card from Maisie, the 8 year old daughter of Jane, thanking me for letting my mam save her mummys life. I will never forget opening it and the overwhelming feeling of pure love I felt. It totally proved without doubt that donating my mams organs was the right thing to do.

I have since become very close friends with both Jane and Teresa, who I call my "unbiological sisters.” We have met up individually, with our families, and all together - Maisie and I are now pen pals! We recently enjoyed getting together and celebrating Teresa’s 40th birthday party.

My mam was an extraordinary woman in both life and death. She lives on in both Jane and Teresa, the other people she helped, and as a photographer the images that she took throughout her life.

I am doing everything within my power to spread awareness about my mams work, and also organ donation, as they are both so important.

On what should have been Tish’s 57th birthday, instead of me giving her presents, she was offering gifts around the country to people who were desperately in need.
We went to South Shields beach where she had spent many a happy day as a young girl with her family, and thought about the people out there getting those life changing phone calls; that helped us get through the sheer horror of what had just happened.

On the day that I collected my mams ashes, I got home to find a letter from the transplant coordinators giving me the wonderful news that all the transplants had been successful and it felt so poignant. It was the first sunny, warmish day after the most bitterly cold March I can remember, and filled me with hope and pride.

I thought about those women and their families every day, and willed them to be well and to recover with the help of my mam.