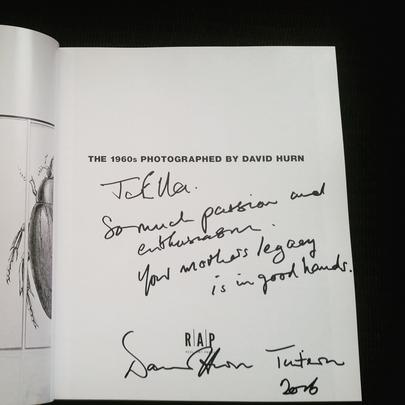 ​​​The Tish Murtha archive is the gift that keeps giving and this project is my gift to my mam. The very last thing I can do for her as her daughter.

Thanks to two very successful Kickstarter campaigns, 'Youth Unemployment' and 'Elswick Kids'  have been published and are both available to buy from Bluecoat Press.

I have been working on some new publications from different projects within the archive, including a series by Café Royal Books which are now available.

I am over the moon that the National Portrait Gallery have acquired six Tish Murtha prints for their collection, including a portrait of Chris Killip at his home in February 1986.

The Museum Of London showed six images from my mams 1983 exhibition ‘London By Night’ as part of their ‘London Nights’ exhibition, which ran from 11th May - 11th November 2018. They have now acquired all six prints for their permanent collection.

Tish Murtha: Works 1976-1991 was a retrospective exhibition which was held at The Photographers Gallery 15th June-14th October 2018. It included 6 major bodies of work; Newport Pub (1976-1978); Elswick Kids (1978); Juvenile Jazz Bands (1979); Youth Unemployment (1981); London By Night (1983) and Elswick Revisited (1987-1991) using both vintage and contemporary prints plus correspondence and ephemeral material from the Tish Murtha Archive. The exhibition was co-curated by Val Williams and Gordon MacDonald with Karen McQuaid. Although this exhibition has now ended, we are looking into possible touring venues.

There are numerous exhibitions coming up, and a book of the Juvenile Jazz Bands series on the horizon, so lots to look forward to.

I am delighted to be working with Artimage who are now managing requests for image usage rights.

I'm having such a wonderful time doing this project and I am meeting some amazing people who are being introduced to me via my mam from beyond the grave. I hope that by doing this I am in some way making up for the sacrifices that Tish made for me career-wise when I came along, and that I can make her proud.